Yesterday was Leave Maui Day but not until eleven p.m. so I had the whole day to think about making my flight and whether I packed everything. On the day you leave a vacation, you wake up partly gone. It's a strange day.

I leave clothes and shoes and toiletries on Maui at Lynn's house so after sorting out what needed to bring home, and throwing my sheets in the laundry, I jumped in the car and went up to Kapalua Bay for a snorkel. I have good parking Karma, wherever I go, which means I get spots close to where I'm going and that morning was no different. Sure, I listened to three songs on the radio before someone left their spot, but that's how I roll. 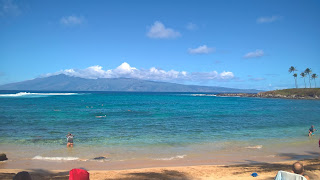 I set up my towel and chair in the glorious sunshine and went straight in the water. This time of year, it's coolish at 80 degrees but once in, the temperature feels perfect! The water was calm in the bay and I headed out on the left side watching the schools of goat fish lazing happily in their groupings, drifting with the swell of the ocean, all going in to shore three inches, all going out from shore three inches.

I saw an enormous Parrot Fish, the bright blue and pink coloring and a strong beak-like mouth to chomp on coral. It must've been 15 pounds at least! At the mouth of the bay, way far out from shore, it was choppy and I started feeling motion sick riding up and down on the surface, so I headed in and laid in the sun for 20 minutes.
After buying 2 salads to go at the Honolua General Store in Kapalua I returned to Lynn's house to have lunch with Lynn on the deck and watch whales. 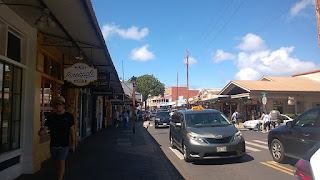 Having not strolled Lahaina's Front Street for a year, Lynn suggested we head downtown and walk the three blocks of famous old buildings that now house T-shirt shops and skin care salons of all things. Lahaina was really windy and my hair was driving me crazy so I bought a hippy headband to keep everything from blowing into my lipgloss. The wonderful thing about being older is that you don't care what you look like most of the time. Not really. 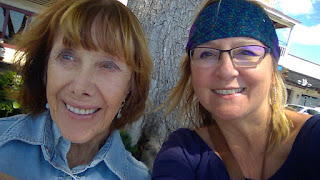 We drove to the other side (the airport side of Maui) at 6 with very little traffic, grabbed a taco at this little hole in the wall we always go to and I had Lynn drop me off at the newly renovated and extremely confusing airport. I'd hoped to sleep on the plane but eventually gave up trying and watched Bohemian Rhapsody, a movie about Queen that was really good. I had no idea that Freddy Mercury was really named Farouk and had such an overbite. The actor who played him was amazing.
I arrived first in Portland, changed planes, then Seattle, and by the time I got home I was ready for bed, happy to be home from my visit with Lynn but still, missing Maui, as I always do. A little less every time I go back since I moved from Maui 25 years ago.

KIM HORNSBY is the bestselling Amazon Author of The Dream Jumper's Promise, Book    1 in a Supernatural Suspense series. She lives in the Seattle area and writes stories for        women about overcoming tragedy, adversity and coming out the other end.
Find her on Amazon Books.
www.twitter.com/kimhornsby  www.facebook.com/kimhornsbyauthor