2016 Billboard Awards were a night of extremes. Here's my brief thoughts as a former singer, actress, performer, dancer and all round noisy pants with opinions:

These opinions, as always, are my own and not those of the dogs lying at my feet or the teenagers nearby complaining about never having enough snacks in the house.

Britney Baby - She wasn't drunk, high, and her hair extensions survived the stripper-like choreography and hair swishing. Highly entertaining and even though she wore little more than pasties and a thong, Brit has never pretended to be anything other than a sex symbol. She doesn't try to be a role model for young women anymore. Her Vegas show is full of expletives and stripper poles, apparently. Two words to describe her extremely suggestive set: sexy and powerful.

Justin Beiber - Love the Biebs! He's a cutie with oodles of talent and did a good job last night. His set wasn't flashy, he didn't beg us to like him, he lip synced to his own track as well as singing along (unlike Britney, I believe) and as a performer who was nominated in several categories this year and had a great chance of winning something, I was happy to see him dance. Two words to describe his enjoyable set: capable and understated.

Kesha - What can I say about this artist who hasn't performed in 5 years because of her legal battles with her record label? Dr. Luke allowed her to perform tonight and we're glad he did. Dressed in a white suit and tie, the artist performed the show-stopper of the night--a version of Bob Dylan's "It Aint Me Babe," lyrics that begged Dr. Luke to let her go without her ever mentioning the man she accuses of so many more things than mismanagement. I teared-up with Kesha's raw rendition. Had she been on her knees it wouldn't have been any more clear. It was like she was bleeding all over the stage. #FreeKesha Two words: Heart Wrenching

Blake Shelton and Gwen Stefani - A muchly anticipated duet by The Voice sweethearts who kept their relationship secret for a long time and aren't seen in public much. He looked like a country star, she wore a beaded gown and movie star hair with pink eye shadow (?) and they sang in harmony staring at each other nervously. They did not look like they were having a wonderful time at all but who knows. Two words: Disjointed and anticipated

Meghan Trainor - This once country (?) singer looked like a cross between Britney and the new Taylor Swift in her choreography and song choice. I believe Ms. Trainor has abandoned country officially with her new song, No, a great message for young women. I like her. I liked her transition and admire her spunk. Two words: Brave and Tuneful

Nick Jonas - He sang beautifully. And Live, not Lip Syncing! I doubt he wore makeup and he def has never worn braces. This guy is the real deal. His duet with Tove Lo, Close, was well done although she was a little pitchy, then the set rotated and we got Devi Lovato who I love! She was awesome, hitting high notes that shouldn't even be notes, strutting and selling her new song Cool for the Summer. Two words: Nick: Real Demi: Showful

Ludacris and Ciara - As hosts they did a good job but they are no Amy Poehler and Tina Fey, or most other duos who get the honor to host a major awards show. Ciara changed gowns and hairstyles every time we cut to commercial which made it more interesting but the chemistry between the two hosts was just lukewarm.

Ariana Grande - Great performance, gorgeous voice, fun ponytail. She reminded me of a female Justin Beiber. She wasn't overly sexual, like Brit, and she didn't stand at the mike like Kesha but it was somewhere between both those performances. Two words: Entertaining and Talented 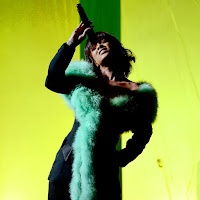 Rhianna - Amazing rendition of a blues number, Love on the Brain by an incredible talent. Loved everything about this performance! I'm a big blues fan but her vocal interpretation was incredible and reminded me of Whitney Houston Two words: Absolutely Spellbinding


Madonna - I have been a big fan of Madge in the past but last night she looked frozen, terrified, stiff, overly suited up, and wooden. Probably she was scared of ruining a Prince song seeing she's not known for vocal perfection but rather as a performing artist. Thus, her performance could've leaned a bit towards the Britney camp with more movement, showmanship and less starched tuxedo and hairspray. Two words: Disappointing and Stiff

Pink - Along with Cirque style trapeze work, Pink did an amazing job of Just Like Fire, proving that you don't have to show a lot of skin and dance provocatively to be artistic. Two words: Daring and Artistic

The Weekend - He did not perform but was up for a ton of awards, mostly for his song I Can't Feel My Face, which I sang along to in the car all last summer. His hair is his brand. He spoke well even though he gushed about how well he knew Prince but said he'd never met him. I was happy to see that Bieber and Adele won some awards as well but The Weekend was the big winner last night, apparently. Two words: Hair, Catchiness

Notes: Taylor Swift was absent, Wiz Kalifah was eloquent, Celine Dion was choked up and Joe Jonas is in DNCE!

Kim Hornsby is an Amazon Bestselling Author, having shared the top five list with Stephen King and Dean Koontz in Psychic Suspense. Find her books and bio on Amazon,

Posted by Kim Hornsby at 3:30 PM No comments:

Dreaming and Remembering Them

Dreaming. Everyone does it. But not everyone remembers their dreams when they wake. I usually remember the last thing I dreamed and when I wake up I try to compose a tweet about the dream. Then I tweet it when I get on my computer, an hour later. Sometimes sooner.
If you follow me on twitter you'll see these rambling tweets. Or go over to #strangedreams It's mostly me and my dreams on that site.
Sometimes dreams leave me with an emotion I carry with me throughout the morning and that can really suck if the subject matter was scary or sad. I'm sure we've all woken up sad and wondered why. I love it when I have a happy dream and wake up happy, or excited about something, or wake up having just had a flying dream. These are my favorites and I have to wonder how I know what it feels like to fly.
But I do.
I have a very clear idea of what it feels like to be up that high and to glide over cities and water and bridges and trees. I wish I could dream of flying every night but I probably only have one of these a month. The feeling of flying is heady and wonderful, like scuba diving in some regards.

Dreams are still an enigma in this modern world. Scientists say it's our hind brain not shutting off when we sleep and feeding us images and ideas, like a pestering child. I prefer to think we actually visit alternate universes.We travel while we sleep.
I write books that always have the protagonist dreaming. Sometimes the heroine has a recurring dream. I have a novel series where the two main characters dream together and apparently this is possible. I had no idea when I started this series.
Dreams have always found their way into my books. Early on in my writing career, I heard that it's an author no no to start a novel with a dream. And to end the novel by saying the story was all a dream. Then I heard that people don't read books about dreams. I wasn't sure why but by the time I heard this advice I was too far gone and working on my next book about Dream Jumping, or sharing dreams. It's only been recently that I realized that the one thing all my novels have in common is dreaming. All the female protagonists are affected by their nightly dreams. Even the novel I'm releasing in the next few months, and doesn't have a thread of supernatural in it, has some strange dreams. Even my romantic suspense novel has the heroine dreaming about this and that. Mostly about the hunky, yet elusive neighbor. Because I remember dreams in the morning and because my husband calls out in his dreams nightly, I am affected greatly by my dream life.
The Dream Jumper Series has some weird-ass dreams and lots of information on lucid dreaming, Wake Induced Lucid Dreams and even ghosts entering dreams, which is something I think I made up until I hear from a reader that it's happened to them.

What about you? Do you dream? Ever had a lucid dream where you know you're dreaming? 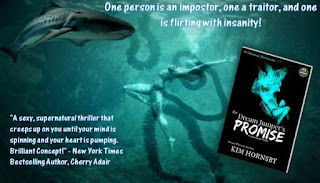 Posted by Kim Hornsby at 9:30 AM No comments: