Just a quick note to everyone to wish you a Happy Thanksgiving.

We've had our twenty person sit down dinner at this point at my house and I'm thinking of putting up the Christmas tree tomorrow but let's continue to be thankful for all our blessings this holiday season.
At first thought, here's what I'm thankful for this weekend, in no particular order:


What are you thankful for?

John Oliver is an interesting TV host, a spurn from the Daily Show with John Stuart, I believe.

As a parent, I fear for the safety of my children, even though the statistics tell me they'll probably be safe.
As a dual citizen of both Canada and the U.S., I wonder if it would be better to move to Canada seeing Baltimore Maryland has more murders in a week than all of Canada does in a year.
I believe you should always ask about the presence of a gun in a house before your child has a playdate at that house.
I'm horrified to see how easy it is for anyone to buy a gun in this country.
And I'm not afraid to say that when they drew up the right to bear arms, they lived in another day and age when personal protection was necessary in remote areas.

Why is it that other countries have strong opinions on what America should do to put a stop to all these school shootings but we vote to hold on to our right to bear arms, like it's every person for themselves here?

This is a troubling topic.

The Bachelor Headed For Disaster!

I can't help it! I want to know what's going on over there on the set of The Bachelor and I have my ways of getting the scoop, pre-January 5 when we start watching Chris Soules' journey to love.
Or will it be a journey to disaster? 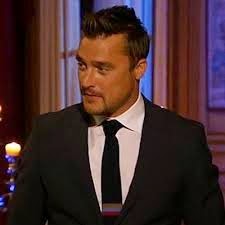 Don't read on if you don't want to know the possible bad joke that the Bachelor Producers have directed towards the farmer from Iowa. If you think that the producers really care about their contestants finding love, you can ask yourself why they'd allow a girl on the show with so many prior arrests. Or one who posed for Playboy and has a web site that links to full nudity.
Friday of this week, November 14th, the show films in Los Angeles and then heads to a certain tropical South Pacific island with four letters and a fabulous reputation, for overnight dates. Chris has four girls remaining after hometowns and one of those girls has a questionable past. 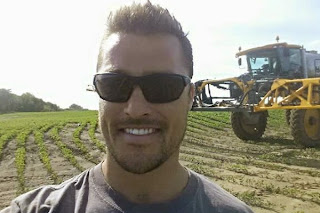 In photos, they look cute enough together but this week, her name was leaked and dirt was dug and Chris is now dating a former Playboy model with priors for DUI, shoplifting, speeding and some other choice offences. Does he know about her past? We have no idea but wouldn't it be just like The Bachelor to know this going in, anticipate the big poop storm that will hit the fan in February/March and be salivating at the thought of Chris actually choosing this woman as his wife. And while the rest of us out here who believe in love, watch the show hoping the next Bachelor finds his perfect mate, the producers are having meetings about how to handle the fabulous publicity when a bad girl makes it to the final four. Which is okay if Chris knows about her past, her photos, video, modeling aspirations, her police record. If he doesn't, then shame on The Bachelor producers for not screening, or for screening and letting a contestant slip by who clearly might not fit in to family life in Iowa as a farmer's wife
In August Chris interviewed on Good Morning America. This is what he said.

"I believe in the process. I believe in what I went through on the previous show. That's why I'm doing it. I wouldn't do it if I didn't feel like there was potential."

Oh, oh, I hope I eat my words about this disaster in March.

Want a happily ever after story? KIM HORNSBY is the author of Christmas in Whistler, a romantic novella on Amazon Books available for sale November 14th for only $.99 throughout the Christmas season!
Posted by Kim Hornsby at 9:32 PM No comments:

The Bachelor is Filming Hometowns 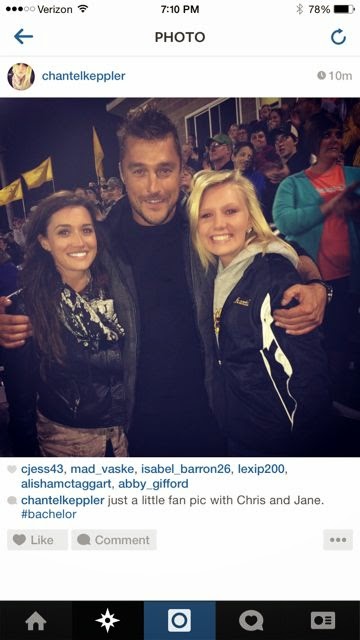 There will be no spoiler alert here, today, this month, because The Bachelor hasn't started yet. Well, not for us to watch on TV. It's almost over as far as filming goes.
Can you believe that??? While we've been satisfying our Monday night Bachelor addiction with Dancing with the Stars, filming for The Bachelor has been forging ahead with the Farmer from Iowa, a fan favorite from Andi Dorfman's season.

Chris Soules is narrowing down the playing field as I write this, to four lucky farmerettes, I mean women. I HAVE jumped ahead to peek at what's going on, where they are, and what they're wearing on dates, but I won't give anything away to those of you who want to watch the whole thing unfold like a game of 52 pickup in January.
Let me just say this much. Chris has been around Des Moines Iowa this last week having final dates before Hometowns, and considering that everyone but me has a smartphone with an awesome camera and a twitter, tumblr and tinder accounts, the social media sites are buzzing with photos and sightings. 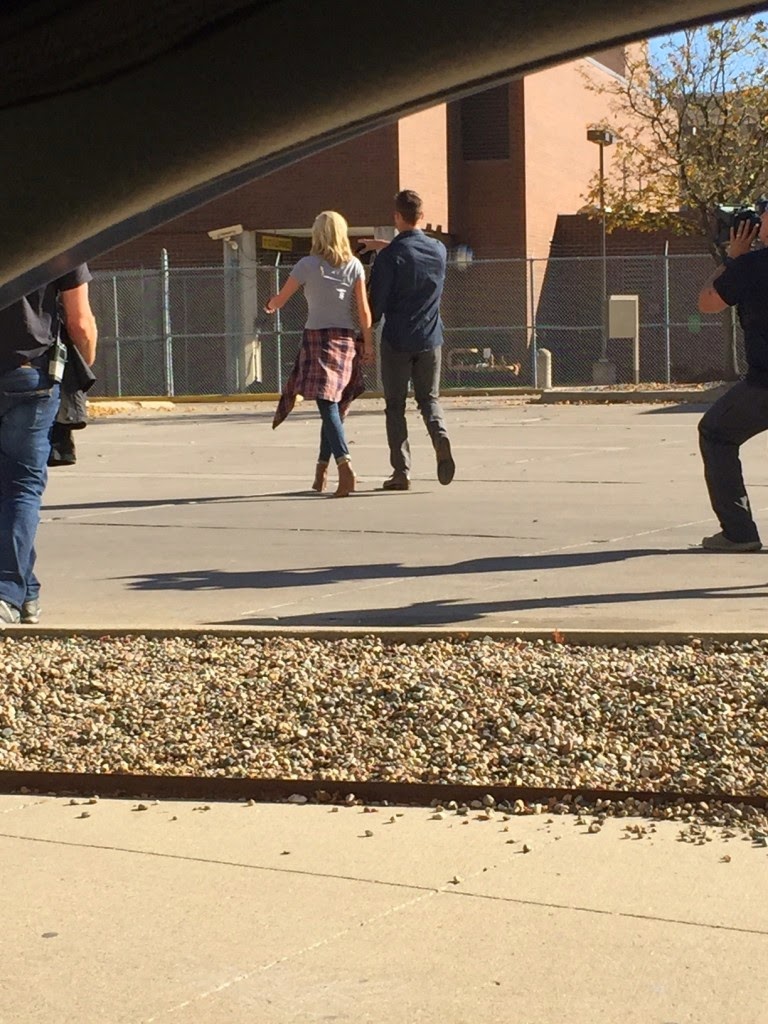 I've seen pics from cars, from football games, in the windows of restaurants, all over Des Moines as fans realize that Farmer Chris is dating in their own backyard.
Strange thing is that there is one girl who is unknown at this point. Reality Steve has no idea who she is until someone sends him some more information. Chop Chop Everyone!
Reality Steve puts together the information like he's running campaign headquarters for a presidential candidate. He filters information, then sends it out on twitter and his blog site to inform the public to their God-given right to know what is going on with The Bachelor. Steve even knows that when the Bachelor productions crew blows in to town, Tinder lights up for that particular town with hookups for the single crew members. If you're unfamiliar with Tinder, I believe it is a social media site for booty calls. Oh to be young in this day and age. One word: Condoms. 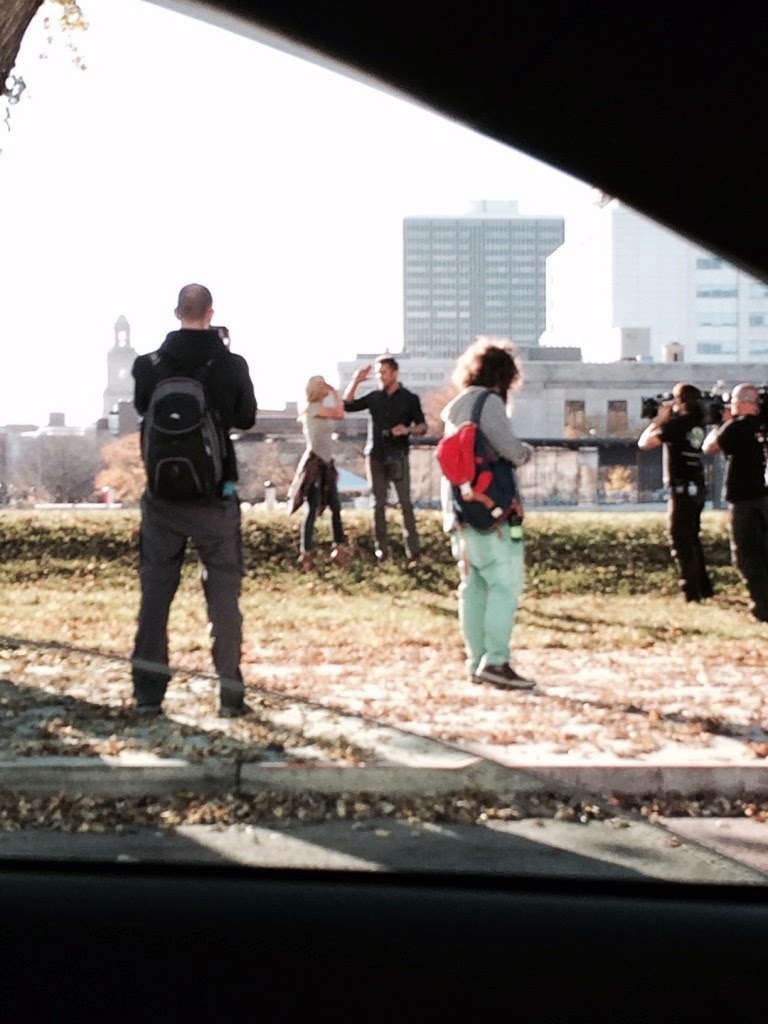 Anyways, Chris is looking good this week and didn't we just know that the down home farmer look was a thing of the past once he went through the PR machine that is The Bachelor. He'll never be the same again, probably will never be satisfied with the small town life, and his new wife, assuming he finds one in this group of highly made up super-modeled looking singles, will never know what it's like to bring in the hay in late August because winter's a comin.

Kim Hornsby writes award-winning novels that are cheaply priced considering how good they are. The Dream Jumper's Promise was Chanticleer's Top Pick for Mystery/Thriller Paranormal this year as well as being nominated for Best Indie First Book by Indie Rom/Con.
Posted by Kim Hornsby at 12:57 PM No comments: