I (Shamelessly) Pitched my Novel to Hollywood!

Here's the long version:
Over two days at the Universal City Hilton Hotel, I got 7 minutes of unadulterated privacy with a Hollywood producer to share the bare bones of my story line.
I also shoved my book into the purses of two other producers, one of whom said she thought my log line was intriguing, the other who was basically trying to leave the room. I weaseled my way into conversations and made the most of my short stint in Hollywood like my children's futures depended on this weekend, which is kind of true. As a polite Canadian, I'm not proud of my behavior but I had a brief opportunity to make a connection and I tried to put myself out there, just in case.

How Did I Happen Upon This Opportunity?

The organization, Sisters in Crime, has a Hollywood chapter that's run by screenwriters, scriptwriters, actors, novelists, talented people in their own right, and they organized an event for an elite number of novelists to come together at the Hollywood Hilton last weekend to learn how to adapt a book to Hollywood and pitch said book to some high powered producers. Free! A friend referred me.
I was accepted very last minute and booked a plane ticket that cost way more than if I'd planned this in advance. But, this was the opportunity of a lifetime for me. I'm a big movie fan, former actress, and pitching to Hollywood just sounded so damn sexy when I said it out loud!


What Did it Involve?
Over 48 hours, we authors were treated to talks from David Isaacs (Writer of Mad Men, Cheers, Frasier, Mash etc), Ron Mardigian (former senior agent at William Morris), Pam Veasey (producer/writer CSI Cyber), and a host of other industry professionals that would knock your socks off. Can you say Giving Back? Pretty sure these people didn't get paid and most of them did not come to the Hilton necessarily looking for a book to adapt.
Some did though.
Over the two day event we networked, schmoozed, learned how to write a treatment, pitched, and watched a scriptwriter fall off a stage and break his ankle. True. I was talking to another polite Canadian who writes Bones when the writer of Agents of Shield stepped back and disappeared off the back of the stage where he'd just charmed everyone with stories of writing for Hollywood. Both Hart Hanson and I said "Excuse me," like polite Canadians, and bolted to the scene.

When the guffuffle died down, I spoke briefly to the producer who'd caught my attention during the talk and sounded like she might be open to a new idea, Michele Mulroney (Sherlock II) and she took my novel. I have to admit, I felt a bit whorish doing business right after Drew's accident but hey, it's Hollywood and I'd scraped together the pennies to get to California. I had one shot at Michele Mulroney and Hart Hanson was off to the ER with Drew. I'd been about to hand Hart my novel and beg him to develop a TV show around The Dream Jumper when our attention landed elsewhere. Damn.

The day before, I'd pitched to Jane Goldenring who took my book, applauded my one liner, was very gracious and accomplished, and I'm hoping she takes a look at my little Indie self-pub and sees something that would translate to the big screen and make a lot of money.
I also pitched to Stan Spry from Cartel Management and he liked the idea of the book and referred me to Haley Stoessl, Manager of Development. Haley gave me her card.

Friday night, at the Sisters in Crime cocktail party, I descended on Snowfall Films exec and powerhouse, Suzanne Lyons, who asked me to send her something-- Suzanne is also Canadian and happens to be funny as hell. Marianne Moloney, who was once a VP at Universal, and discovered the book Ordinary People also worked on Roxanne, one of my favorite movies, with Steve Martin. She said I had a great name, for whatever that's worth. I hope to find her contact info and will remind her of my great name.
We met readers for studios like Dreamworks and Amblin, who spend all day reading books to recommend, or not, to their bosses. They talked about what they look for. One turned down Fifty Shades of Grey and stands by that decision.
The whole weekend was absolutely fascinating and I got on the plane Saturday night with a thirty-seven pound head full of info and full of myself because hey, I frickin pitched to Hollywood!

Here's my log line:
The Dream Jumper's Promise is about a guy who can slip into other people's dreams and uses that to solve a crime.

Here's some of what I learned this weekend in a nutshell (a pistachio, not a walnut):

-Hollywood likes books better than concepts because novels are finished, complete, characters are fleshed out. Authors are pre-approved.
-Sometimes not having a huge contract with a big 5 agency will be appealing because the rights to your book are more readily available and cheaper.
-Be prepared for changes to your book. The screenwriter might completely change everything but make sure you get credit: Based on the Novel The Dream Jumper's Promise
-Managers can work harder for a client than an agent if you're with a BIG agency
-Unsolicited material isn't as welcome as if your agent sends it (or your entertainment attorney!)
-Learn how to write a treatment, do not leave out the ending in all its beauty
-Scouts in New York meet regularly with agents trying to find books that will adapt to movie well
-Ask your agent to get on the Friday list to producers--Notable Books of the Week
-Get an agent! Imperative to lend credibility to your project.
-Find the one thing unique to your book and lead with that in your pitch
-Don't try to tackle screenwriting to sell your novel, There are experts for this.
-If a producer options your book (ties it up while trying to get a studio on board) be patient
-When you pitch, tell it like a campfire story with lots of vocal inflections.
-No more than 5 characters in pitch
-Only pitch action, no dialogue
-Thrillers are popular, especially with a female protag
-In the pitch, include the hard decisions that turn the plot
-To get these people's attention, you need something unique and you need to be aggressive. Not obnoxious, Ron said, but aggressive.
-Short Stories sometimes rise to the top of the pile for TV ideas
-If a producer options your book it may take a year or two to get the studio, director, screenwriter on board. You must be patient.

Good Luck. Somebody's going to get a movie made from their book.
It might as well be us, right!? 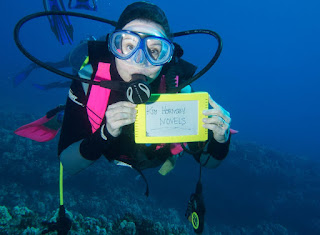