I Was in a Movie! 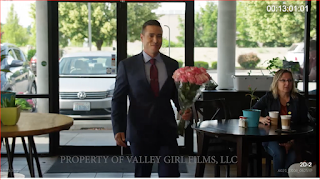 This is me. Right here, at the table. Look how focused I am!


I'm not sure if I'll be up for an Emmy Award next year, this time, but my acting skills look amazing in this TV movie, from what I've seen, which is only this photo.

In early June 2019, I drove all the way across the state of Washington to be an extra in a movie by two women producers. One is JD, my agent/literary manager and the cracker jack who sold my Christmas Romance screenplay recently to a company who will film in the next months, the other, Robin, is a producer who bought the option to make The Dream Jumper's Promise into a feature film. (Both really want to make that movie and I absolutely love them for that!)
So when they had a shooting schedule for their TV movie about a barista falling for a guy who builds houses for poor people, I really wanted to be any part of it they might tolerate. I didn't write the screenplay but I still wanted to be on set.

I got in the car the day before my casting call and drove across the state on my adventure. I was getting over bronchitis, still coughing and hoped that my hacking cough would settle down by tomorrow. There wasn't much that was going to stop me from being in this movie, or at least supporting these two #womeninfilm because I was so excited I was creeping them both on social media for on set photos every day.

I checked into my Air B&B, settled in for the night with takeout dinner and watched Always Be My Maybe on Netflix, a film that made me laugh out loud a lot.
The next day, I woke and got ready for my big day on the set of Home Sweet Home, a few miles away. It was a lovely sunny day in Spokane Washington, something that was beneficial when you have scads of electrical equipment outside a coffee shop while you film inside.
Snafoo: Pulling on my jeans, I realized they no longer fit. I'd recently gained a few pounds and although the jeans were stretchy, they weren't that stretchy. Dang. My other pants were white, a movie no-no color. I covered the front with a long top, did my hair to try to get some height from my increasingly thinning dome and realized I'd forgotten hair spray, something my wispy, thin hair cannot go without. Another dang.
I left the little cottage I'd rented and set out for the drug store for hairspray and Ross's Dress for Less to buy jeans. I'd seen the clothing store when getting takeout the night before. If I skipped a Starbucks run for caffeine, I'd have enough time to buy jeans and get to the meeting place for extras to sign in at 10:15.
Pulling in to Ross's parking lot, I realized my jeans had stretched enough on the drive that I could fasten them closed so I got back in the car and went for hairspray. Once I had my hair sorted out, I still had time for coffee. I believed. One grande latte later, I was on my way to the set of the movie.
Our meeting place was a big church parking lot but upon arrival, I didn't see anyone out and about. Nobody with a clipboard, no movie looking people. I drove around looking for signs of actors, directors, wardrobe people but nothing.
I was right on time. Where was everyone? After checking my emails to see if I got the location wrong, I saw someone who looked like movie crew enter the church. They were inside the church? I hadn't gotten the memo.

I parked and ran through the parking lot to the church door, now ten minutes late for being slightly early. Inside, I found a big room with a kitchen and people and snacks and clipboards and I realized this was Command Central for the movie. I checked in with Suzanne, the casting director, and ran back to the car to get my clothing choices for the day so the wardrobe lady could choose. I thought I was dressed exactly like the photos sent the night before as a guideline however, I had a rip in the sleeve of my cute green jacket in the back and had to change, which was perfectly fine but slightly embarrassing to arrive on set looking like a hobo with a ripped jacket.
Once I got changed, I went to the makeup room for face powder and then we were shuttled in a van to the coffee shop where the stars were waiting. Shots were set up, and I was eventually moved inside the coffee shop to a table where I could watch and listen to the Director, DOP, prop people, Assistant Director, actors. Inside I could really see how a movie is made. Most of the extras had worked on a zombie show called Z Nation which shot in Spokane, so it was interesting talking to them about their experiences as zombies and towns folk.

Observation: Those poor actors have to say the same line 20 times over and over sometimes, not because there was anything wrong with their execution the first time, but to get the correct lighting, positioning, camera angle. I realized that movie making is more about lighting than acting. The real diva of the day seemed to be the camera and its need for good lighting.

When my day inside the coffee shop was done and the extras were shuttled back to the church, we gathered up our stuff, signed a bunch of paperwork, said our goodbyes and headed off to real life.

I didn't get a chance to meet the female lead that day. Natasha Bure stayed quiet and in character, plugged into her phone and music when not working. I did meet the two male leads, one being a lovely young man from Spokane named Gabriel who plays the suitor who is all wrong for the girl and the other being the polite young man, Ben, who plays the guy who gets the girl. When I sat down beside Ben on the curb, he got up to offer his chair, which was a gallant gesture. Chivalry is not dead. I didn't need his chair but it was nice of him to ask.

Home Sweet Home is a movie about a young man who builds houses through his church and meets a somewhat superficial barista woman who pretends to be handy with a hammer to get on the build site to meet this man. It's a cute story, written by a fellow Seattle author and screenwriter, Lesley Ann McDaniel, and with a distribution deal, it's scheduled to be released Valentine's Day 2020. I, for one, can't wait to see what the rest of the story holds. I know the coffee shop scene pretty well but it'll be fun to see the movie in February and watch the story unfold. 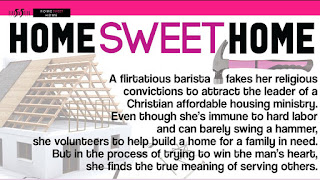 If you ever get a chance to be an extra on a set, you'll be surprised how long it takes to film a page of screenplay and what goes in to making a movie. The camera is the star, the diva, the one they pamper, not the actors, and not the extras who are sitting on the periphery watching the pieces of the puzzle fall into place to make a story. But together, we all contribute to make the story come to life to bring it to you on the screen. Let me know in February if you think my performance is Emmy worthy.
I'll just be happy to not end up on the cutting room floor!


KIM HORNSBY is the bestselling Amazon Author of The Dream Jumper's Promise, Book 1 in her Bestselling Supernatural Suspense series. With 9 published novels and several screenplays circulating Hollywood, Kim lives in the Seattle area and writes stories for women about overcoming tragedy, adversity and coming out the other end triumphant.

Find her on Amazon Books