Book covers are super-duper important to authors' sales! A great book cover leads to the person reading the blurb. A great blurb leads to... You get the picture.

My Dream Jumper Series was first published in 2013 with a cover I made myself. I didn't have the extra money to commission a cover artist for $150, so I made my own. Looking back, it was a DIY rinky dinker.

I fiddled with probably ten different versions of that photo of the two holding hands on a beach, then finally found a cover designer who charged what I thought was a reasonable rate. By this time I was making money off the book regardless of the home made cover. I filled out her form about what the story was, who my market was, what I hated in book covers, what I loved and she came up with a really pretty, conceptual style cover that conveyed the setting, the danger and a gorgeous font. I'm kind of a font nerd so this was important! 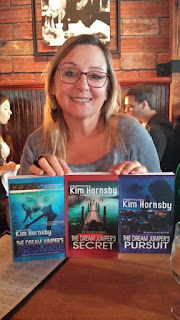 I kept with that pretty blue cover for a couple years. That same designer did the next two books in the series and I loved them all at the time. The second book Secret had a dock which I happen to love on book covers. They indicate a journey, a jump off to unknown waters and that's what Secret is about. A friend of mine later suggested we add in a threatening shadow and that worked beautifully! The third book Pursuit, was a bit of a mish mash and I take full blame for that cover. It was supposed to be the city of Granada in Nicaragua with the heroine going after a child abductor but it turned out a little strange. Still, I loved her font and design of all three books!

Then, two years ago I decided to jump on the Gone Girl style of Book Covers Train and do something really simple on a black background.
Now, it's six and a half years later and this book has done well. Well enough to attract the attention of a literary manager who encouraged me to turn the story into a screenplay.
I did, it won some awards, and is now over at Amazon Studios being considered as a movie. It's a very long shot they'll pick it up but you never know. My manager loves this story and wants to see it as a movie some day. Me too. 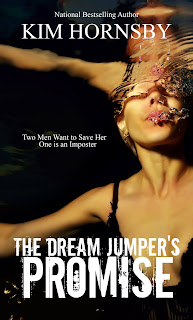 I made new covers in celebration of the book needing a shot in the arm. Nothing too strange, different or busy. Same black background and gritty font but a clearer photo this time with a tag line. I'm one of those Indie Authors who, if I can fiddle with my work and change things, I will. I republish one of my books every week, even if it's just because I found a sentence I didn't like. Sometimes I republish the interior of a book because I have a new website, which means all books must be republished to direct readers to my site.
I ended up liking the new covers. They're conceptual. The Promise book does have a lot of underwater scenes but the Secret book doesn't necessarily have a red hall and the Pursuit book doesn't have a scene with a flower that won't burn. I like metaphors and my readers are smart.

I hope you've enjoyed the Dream Jumper series and if so, have blessed me with reviews. One reader in about 300 reviews the book and I find that number staggering. If you spent 4-6 days reading a book, living with the characters that someone created and you finished the book and liked it, I would hope you'd take a moment to tell the world (really, the author) that it was an enjoyable read. I write short reviews for books I read because it's not my favorite way to spend my time. But I review.
And if a book cost me below $2.99, I know the author is making only a few cents off my purchase so I be sure to show my gratitude.

Book Covers are important as the first opportunity an author has to draw you in to the story. I hope these new covers lead you to the next step in buying the book. The Blurb...

THE DREAM JUMPER'S PROMISE on Amazon


Kim Hornsby is the Author of Award-Winning The Dream Jumper's Promise available on Amazon Books. She is a Bestselling Supernatural Suspense Author who lives in the Seattle area where she writes during the rainy months.