GET YOUR GHOST ON!

Fear of the unknown is a powerful emotion.

What's more unknown than paranormal? And that includes ghosts. Bwwwaaaaaa...
I'd like to say my new novel series is really spooky and scary but it's more suspenseful and amusing than filled with horror and fright. There will be spooky moments because it's about a woman inheriting a haunted house, but the book is also about her trying to cope with being newly blind and discovering her new life as a blind paranormal investigator.
As the title of the series mentions, there is a ghost and I'll let you figure out how that entity comes into her life and what that ghost does for her.


Find DEAD AHEAD on  AMAZON,
NOOK,
KOBO,
iTUNES
and MORE.

Dead Ahead - Book 1, is a 3-hour read at 40,000 words (half a novel) and is on Presale now for only 99 cents. The book launches SEPT 6th.
I'm not sure if the price will go up but it won't go down. That I know. It's been read by my team of beta readers and typo hunters with great excitement. Everyone loves Bryndle Moody and can hardly wait for Book 2.

"Such a fun read! Can't wait for the rest of the books." Chetty M

"Oh Kim, I love this story and Bryn is awesome and the storyline is awesome I think that’s why I’m dying here cause I wanted more!!" - Donna B

"The book is wonderful! It is definitely going to be an interesting series and I look forward to it." - Lavisha P

"I have to say that I really enjoyed this and look forward to seeing what comes next!"  - Sandie K


If you like ghosts, mysteries, snark, paranormal, affordable books, humor with your mystery or just me, I can highly recommend you take a chance with DEAD AHEAD.

Here's a sneak peek of the first 2 pages to see if you like it:


Five months ago, I was perfectly capable of more than descending a staircase on my own. I often took two stairs at a time.
These days, I must be helped down stairs by my younger cousin, Eve. Being dependent on someone else 24/7 was on my This Totally Sucks list, along with having someone buy my groceries and lead me to a car I can no longer drive. And, although this next one doesn’t keep me from functioning, I have a large cut on my face that’s “healing nicely,” according to the plastic surgeon. The wound I originally called "Frankenscar," runs from my cheek to my chin and is responsible for introducing me to scads of doctors and nurses at Seattle’s Swedish Hospital in the last few months.
There have been many adjustments since the accident, not the least of which was the loss of my soul mate, Harrison Moody. But, I can’t talk about Harry. Not yet. I’m trying to concentrate on the positive, as suggested by everyone who knows me. Including the woman helping me down the stairs, Evelyn Xio Primrose, a woman with whom I used to share that last name until I married Harry last year. Then I became a Moody.
My name is Bryndle Moody and I have a Youtube show called Moody Paranormal Investigations. Ghosts are my specialty. They love me. In the biz, I’m known as a medium, but I like the more badass term Ghost Hunter, even though my small team of investigators hunt to help ghosts, not annihilate them. I’m a bit of a celebrity in paranormal circles. At least I used to be.
I’m known to my Youtube followers as Moody, which is appropriate as I attempt to adjust to not only being a young widow but being as blind as a bat. This expression, I have recently found out, isn’t accurate. Bats are not blind. I looked it up online with the help of my vocal software that translates screen to audio.
As I walked to the car, on Eve’s arm, I thought how this day was getting stranger every hour. First, I woke to my mother, Rachel Primrose, calling my cell phone to say her neighbor and friend, Mrs. Giovanni had died mysteriously.
“I watched the ambulance take her away just now. Horrible. She was such a good neighbor.”
My mother wanted me to come over to do a reading. “Why not let the police handle it?” I asked, knowing better than to engage with her but I was fuzzy from sleep and temporarily forgot her history of being a dangerously aggressive Budinski.
“They think she died in her sleep but that daughter of hers…”


“I’ll call you later,” I said, ending the call. My mother and I have a complicated relationship. That doesn’t stop her from calling me three times a day. Or me from hanging up on her at least twice. We have a strange dependency on each other.
Then, while I was walking from the houseboat to my car an hour ago, a crow landed on my shoulder. Eve screamed when she saw the big thing alight on me, but I happen to love crows. I once befriended one, who could say “Shut the god-damned door.” It flew away after a few days of hanging around my uncle Ogden’s house, where we lived temporarily. They are so incredibly smart. If my telepathy wasn’t dead-in-the-water right now, I might have known why this morning’s crow came to me. I’d often read my dog Hodor’s mind. But, I didn’t get anything from the crow except that it thought I was its private launch pad. I just stood very still, enjoying the moment with the weight of a large bird on my right shoulder until Eve shooed it away.
“Scram,” she said, after her little yelp to see a large black bird on me.
Eve is very protective, sometimes taking her job as my assistant a little too seriously. I later wished she’d gotten a photo of the crow sitting on the shoulder of my favorite pleather jacket. I choose to not wear real leather, but you can. I don’t judge. I eat hamburgers so go figure.
With social media such a big deal now, and me a business owner, I was constantly telling either Eve or my tech guy, Carlos, to take a picture for our Snapchat, Facebook, Instagram or Twitter accounts. Today was no different except I was too thrilled to have the weight of a crow on my shoulder I didn’t dare say anything. You could say Moody Investigations is as big on social media as we are on ghosts. Youtube is our livelihood, our bread and butter.
On the drive to Seattle’s downtown, I wondered if the crow was Mrs. Giovanni, then realized that was not possible. It was a strange thought, even for someone who believed in some pretty wacky stuff.
The next unusual event occurred when we arrived at the lawyer’s office, were seated and were told that I’d inherited a house from someone I had no recollection of ever meeting. I’d previously been informed there was something left to me in this woman’s will and I’d thought maybe as a fan of the show she’d left me a weird statue or a favorite black cape. But the woman, Belinda McMahon, had left me a house. On a piece of property. In Oregon, which was the next state over. I didn’t know yet if the house was a dilapidated shed on a sliver of swampland but the fact that someone wanted me to have her house was both touching and mysterious. Unless the house came with a curse.
Unfortunately, the lawyer, a man named Sheldon Rinkle, (who Eve had secretly renamed Seldom Wrinkled,) knew nothing about the structure, only that I was the recipient of the house.
The deal was that if I accepted the house, I couldn’t sell it for five years. I immediately wondered how many years of upkeep I’d have to contribute to warrant inheriting real estate. And how much I’d need to spend on taxes. Then, Mr. Wrinkled told me five years’ worth of taxes and repairs had been factored in to an account his office was paid to manage.
Very mysterious.
Walking across the parking garage, I suggested Eve and I pretend to both be blind when we saw a car coming. “Keep your eyes open a little to tell me if they look horrified,” I said. But no cars approached, and I didn’t think Eve was totally on board with my little joke. Knowing her, she’d think it was unsafe for her to even partially close her eyes in a parking lot.

Find Moody & The Ghost - DEAD AHEAD on  AMAZON,
NOOK,
KOBO,
iTUNES
and MORE.
Posted by Kim Hornsby at 10:34 AM No comments: 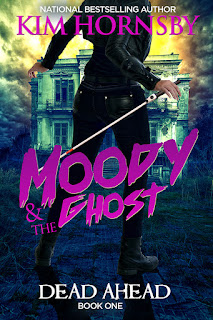 My newest book, which launches Sept 6th, is the ongoing story of a woman who's lost her sight and just might lose her business if she doesn't think of something fast.
Bryndle Moody is a paranormal investigator with a Youtube show and thousands of followers who are waiting for her next show. But, having not only lost her sight in a car accident but losing her new husband, has Bryndle grieving and consequently unable to access her clairvoyance or abilities to reach ghosts, something that defines who she is.
In accepting  she's now blind, Bryn must learn to use a white cane as well as her braille watch and practice listening, instead of relying on sight. Cooking is something she longs to do but is unsure how to go about it. In the book, she makes dinner and I've included her lasagna recipe in the back matter of the upload. Yummy!

The first book has Bryn inheriting a house months after the accident and that mysterious incident leads her to take action to try to get her "super power" back. But, it's not as easy as it might seem and things look bleak until a strange entity enters her life.

The book is on presale everywhere, is a 3 hour read and only 99 cents!
I'm now busy writing the second one which will be available in early October for 99 cents.
Check it out...
AMAZON
iBooks
KOBO
NOOK
Other etailers

I wrote the book with lightness, humor and ghostly apparitions. If ghosts intrigue you, like me, you might enjoy this book that follows the life of a medium who speaks to ghosts.

KIM HORNSBY is an Amazon Bestselling Author best known for The Dream Jumper Series, which is optioned for film, with over 400 reviews on Amazon at 4.5 stars.Sign up for her newsletter to keep posted on news and freebies and contests or follow her on Amazon.
www.bit,ly/kimamznwww.bit.ly/KimHNews

Posted by Kim Hornsby at 6:49 PM No comments: