Girl of His Dream - First Chapter 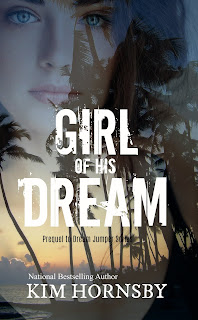 I wrote Girl of His Dream after writing the Dream Jumper series because I wanted my readers to know Jamey and Tina's history, years before The Dream Jumper's Promise begins.
The book leaves you wanting to find out what happens to these two, I'll warn you.
It's permanently FREE on Amazon Kindle (just download the Kindle app if you don't have a Kindle and read on your phone, laptop, device).

GIRL  OF HIS DREAM

James Dunn watched the small girl follow a group of boys behind the hotel pool’s waterfall, her chin just above the water’s surface. A feeling of dread overtook the thought that he needed sunscreen if he was going to sit in the Hawaiian sun any longer. James’s skin prickled.
For two reasons: The sun was stronger than a Seattle Spring day, and his clairvoyance often made his skin prickle. Actually, crawl.
Seconds later, when the boys emerged from the other side of the falls, the girl wasn’t with them. Was she waiting for the older boys to get far enough ahead so she could remain hidden? His intuition said no, and his intuition was freakishly accurate.
As he rushed to the pool’s edge, someone cried. “I just saw her a few seconds ago!”
James didn’t turn, didn’t hesitate.
A dive into the pool took him half way to the falls and a swift front crawl took him the rest of the way. He dove under the crashing water, arms spread wide, eyes open, as he felt around the pool’s bottom. Through the aerated water, he saw colors, then felt a foot—a small foot that fit in his hand. Yanking it towards him, there was no resistance from the other end. A bad sign. She’d been under maybe only twenty seconds.
He pushed off the bottom and broke through the surface with the girl in his arms, the water pummeling his head and back. He stepped clear with the girl’s lifeless body. “Wake up,” he said as he checked for a pulse.
Someone yelled “Help!” and “There she is!” Several bodies hit the water with a splash.
“I’m a cop,” James said to the approaching people after he blew four small breaths into the child’s mouth. Christ, she didn’t even have front teeth. She was young. He blew again, his intuition forgotten for now.
People yelled for the lifeguard and someone yelled an ambulance was on the way.
Blowing rhythmically into the child’s mouth, James took her to the pool’s edge where the lifeguard looked ready to take over. Someone held up her legs, another person had hands on her shoulders.
“She’s got a pulse,” James said, between breaths. “I’m a cop.”
“Keep going.” The lifeguard helped to set the girl on the pool deck’s surface.
A body moved in next to him. “Mara, don’t leave us.” The woman’s hands caressed the girl’s hair, smoothing it away from her still face. “Mara, stay with me.” She let out an anguished sob.
The child’s small nose in James’ pinch felt easily breakable. He eased up. Two more breaths and James sensed she was reviving before anything changed physically.
Mara coughed and her eyes fluttered open. The lifeguard helped to drain water from the girl’s lungs by turning her head to let her throw up pool water.
“Thank God!” The mother kissed the child’s wet hair. “You’re okay, Sweetie. Mommy’s here.”
Mara continued coughing, and as she came to, she looked disoriented and frightened. James moved away to let the mother shift into the child’s line of vision. A man knelt beside her, tears flooding his face, a grim mask of fear and relief.
The lifeguard helped Mara sit up as she began to cry.
“Doctor coming through,” someone called, as a woman rushed forward.
“She’s conscious,” another person said.
James stood back to let the doctor in, watching the parents touch their daughter like they couldn’t believe she’d survived. Guilt emanated from the father. Guilt and regret. James wished he couldn’t feel this man’s private emotions. But he could. And the mother’s, and the lifeguard’s, and the girl’s. He was cursed with this supposed gift.
The crowd that had gathered emanated a collective sigh of relief and gratitude. James picked up on shit like this, whether he wanted to or not. Someone behind him was furious, several people were moved to tears at the close call that might have resulted in death. One person was mostly glad his family vacation wasn’t ruined by witnessing this child’s death. Selfish prick.
James said a silent thank you to whoever, or whatever was out there that prevented the tragedy.
“Who pulled her from the pool?” a young man in a Hyatt uniform asked.
People nodded towards James.
He knew the drill. There’d be statements, paperwork, and explanations of how he knew the child was in trouble. As usual, he’d explain it was just a cop’s intuition, a lucky hunch, the last words being a phrase he’d been using for years to explain a gift that had no explanation.
A gift that both dictated and threatened to ruin his life.


This novel is FREE as an ebook on AMAZON HERE if you want to keep reading...

KIM HORNSBY is the bestselling Amazon Author of The Dream Jumper's Promise, Book    1 in a Supernatural Suspense series. She lives in the Seattle area and writes stories for       women about overcoming tragedy, adversity and coming out the other end.
Find her on Amazon Books.
www.twitter.com/kimhornsby  www.facebook.com/kimhornsbyauthor
Posted by Kim Hornsby at 8:32 AM