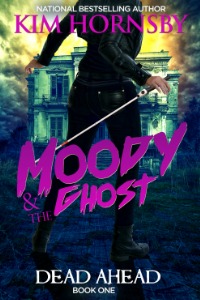 I was instructed to send you this email one hour after you left our offices. It’s from my client, Mrs. Belinda McMahon.

Dear Mrs. Moody:
I am trusting to you my most valuable legacy, knowing that your life has been based in paranormal experiences that many pass off as fabricated stories. I believe in your talent.
Cove House is blissfully haunted, and I want to leave this grand old lady to someone who will appreciate its many qualities.
It is with great joy I pass along my home to you. There’s only one other request beyond keeping it for five years, and that is that you do an investigation. What you will find in Cove House might surprise you.
I’m counting on your expertise and generosity to help the ghost.
Sincerely,
Belinda McMahon

There was a catch! I knew it. But an extremely good one, it seemed. I’d inherited my own ghost. Today felt like Christmas, with me getting the best toy ever imagined. My heart pounded in my chest and I felt like punching the air in enthusiasm. What did blissfully haunted mean? I wasn’t sure what to make of the letter, but the prospect of a ghost investigation where no one was hanging over my shoulder waiting for a report was appealing to me. In my business there’s always a client, and demands, and a time frame, and sometimes disappointment.
Even though the house was mine, Belinda McMahon felt marginally like a client, but because she was dead, time wasn’t a factor. Nor would there be disappointment at not finding a ghost. Occasionally, a client expected more ghost action besides me just sensing occupation and telling the ghost to move on. Some clients wanted to see the ghost themselves and I had to explain to them it didn’t work that way unless they were psychic. Only a select few got to see ghosts. Not even Carlos and Eve were lucky enough to get in on the action, most times. Eve was on the verge of tapping into her inherited talent and I was trying to speed that process along. Carlos had the standard five senses. These days, I was down to five myself, possibly four, if my clairvoyance didn’t kick in soon.
I texted Eve, who was twenty steps away in her bedroom, to tell her our exciting news about inheriting a house that was haunted and was now a hundred times more interesting. A thousand times.
Even if it was a two hundred square foot trailer, I owned a ghost.
Eve emerged from the other part of Floatville, the area with two bedrooms and a bathroom. “I knew it!” She sounded as excited as I felt. “Now we have two haunts,” Eve said.
We’d recently been given the go-ahead on a restaurant investigation east of Seattle. The owner had emailed me about setting up the date to explore his haunted restaurant and I was excited at the prospect of gently working my way back to the land of the unliving. My calling card in the paranormal industry, if you can call a bunch of mediums and psychics an industry, is that I hold the honor of being the only ghost hunter who has ever captured a clear image of a moving ghost on video. A stroke of timely luck. The footage of a white apparition crossing a room in a Seattle warehouse went viral last year. It’s five seconds of ground-breaking video. Non-believers said the tape was fake, that it had been doctored, but believers knew it hadn’t. I was used to skepticism.
“Which place shall we investigate first?” Eve asked.
I hadn’t felt anything telepathic since the accident and hoped it was because I’d been blocked by grief. For five months we’d been referring cases to another ghost hunter in Washington State, but now I felt ready to get an investigation on our books and uploaded.  “Maybe The Eatery in Roslyn,” I said to Eve. Our new case was a small restaurant less than two hours from Seattle in a town called Roslyn where a famous TV show was filmed in the 90’s because the town resembles Alaska. The restaurant had a resident ghost—a female spirit that had been seen several times. I’d taken the case knowing it was a slam dunk for a skittish rider getting back on the horse and was hopeful we’d be able to help The Eatery’s owner, Jim.
Although visiting haunted houses wasn’t financially lucrative, our show on YouTube was and we needed to get product online after so much time of nothingness. Having a ton of subscribers on YouTube allowed me to pay two employees a decent wage only because I had sponsors and clicks and everything you need to get money on YouTube.
When I’d decided to take The Eatery case, I was sure the haunted restaurant would produce something wonderful and had been cautiously hopeful. But, having inherited a haunted house in the opposite direction, I was torn between two haunts now. Although Mrs. McMahon’s letter was ambiguous, I was thinking that exploring my inherited house could be my psychic litmus test with no client watching me. It was an opportunity for me to see if what Carlos called my “loco mojo” was still alive. “First on the list, we’ll check out the Oregon house with no formal investigation, then head off to The Eatery, see what that ghost has to say,” I said.
It was with a glimmer of hope that I emailed Carlos to tell him my news of the inheritance and invite him to road trip to Oregon’s wild coast tomorrow. I would figuratively look at my inherited property and if I felt the presence of a ghost, I’d be farther ahead than I was today. If I didn’t feel anything, I’d deal with that at the time. Even if my inner sight had gone AWOL, Eve could handle things in Roslyn. Her abilities, although undeveloped, were strong enough in a situation where the ghost had appeared multiple times. She and I would play that one by ear having already discussed working in tandem to make it look like it was business as usual for Moody. Nothing wrong here, folks.
Carlos would film me lying my face off about feeling a ghost.

KIM HORNSBY is the bestselling Amazon Author of The Dream Jumper's Promise, Book    1 in a Supernatural Suspense series. She lives in the Seattle area and writes stories for       women about overcoming tragedy, adversity and coming out the other end.
Find her on Amazon Books.
www.twitter.com/kimhornsby  www.facebook.com/kimhornsbyauthor