Every story needs suspense to keep it moving forward. Even The Three Little Pigs has elements of suspense with the wolf threatening to huff & puff!

Here are the notes from my PNWA presentation September 26, 2020 on Zoom, about using suspense to drive that story. The notes were compiled by myself and Christine Fairchild, the Editor Devil for our 2 hour class.

·         Unfold the story/mystery. Whether solving a crime or just setting things right—there must be revelations/discoveries along the way, beginning to end

·        Allow characters to follow a trail of clues that need to be decoded (by the hero, villain, side kicks) to piece the puzzle together

·         Strike a balance between action/suspense and narrative—can’t be suspenseful every moment. Take a break from action occasionally. Use comic relief, pauses between suspense, or even give characters time to reflect and plan for their next move.

·         Throw in the dreaded monkey wrench to mess up events/expectations (storm at a picnic, fired day of buying a house)

·         Include Red Herrings and Dead Ends/Bad Leads, but know when to use/avoid them so you don’t overuse them. Or let a Red Herring be the real deal in the end, like the missed/dismissed clue.

·         Put two (or more) events and/or characters on a collision course. Marriage vs. funeral, promotion vs. demotion, baptism vs. prison sentencing.

·         Add complications right to the end, not just in the plot or events, but in the characters.

·         Create consequences that are dire, threatening, personal, must block truth from hero succeeding

·         Write your bad guys and good guys so they share aspects of the other & let them switch roles in scenes occasionally so they are unpredictable.

·         Add character traits that readers dread in your hero/heroine, like manipulative characters or ones with bad/dangerous habits, so they are edgy.

·         Show soft side of bad guys, like a serial killer (make us like him). Reversely, show the killer side of hero/heroine so the reader has an emotional push-pull.

·         Employ secrets, secret identities, lies, hidden information that, if exposed, will hurt someone. Then expose them.

·         Inject misunderstandings between key characters that are connected to the plot. Like people misunderstanding each other or events (a detective not understanding a clue or intel), or a character not reading hidden motivations for another character’s actions (sociopaths disguising stalking for flirting. See Ted Bundy.)

·         Allow power plays between characters, especially between protagonists and antagonists. Does the bad guy always get the best breaks? Let that come back to haunt him in the end.

·         Let fears and phobias create unpredictable characters/actions/decisions. The FBI agent terrified of heights climbs a tower to save the woman he loves, but gets stuck halfway.

·         Reverse expectations when possible, but make sure it’s believable and not ridiculous. That FBI agent can’t climb back down because a fire started below and he’s more afraid of fire than heights.

·         Play with POV (which character viewpoint is running the show) but don’t use too many character POV's or it dilutes reader attachment and thus dulls reader response. Definitely NEVER switch POV midstream in a scene.

·         Leave your main character (or even the reader) in the dark, like when a train is heading toward the character who’s distracted (see colliding events above).

·         Allow weapons (for destruction or for defense) to malfunction.

·         Let physical objects do the talking so they can inform/misinform your main characters.

·         Deliver "loaded" devices that carry meaning/symbolism, like the heroine’s Teddy Bear about to be torn apart, or the rose from her boyfriend now covered in blood from the serial killer.

·         Don’t lose track of your devices! A gun in the opening needs to be accounted for through the rest of the story till it’s used, lost or destroyed. That creates anticipation.

·         Use unpredictable dialogue and subtext (speaking in code) so readers can’t wait to hear what they say next.

·         Start with a hook, end with a hook. In fact, load your scene/chapter openings and endings with hooks.

·         Create reading momentum through paragraph breaks, action ramping up and gearing down (note: time between action scenes are shorter near end), and shift in settings/events (moving from one place to another, especially if new place is more interesting).

·         Create suspenseful/moody environments on both the physical and mental levels (like the cave in Star Wars symbolized Luke’s inner fears/darkness while the Death Star was his the physically realized fears/darkness).

·         Inject elements into the setting that come and go and thus unreliable or unpredictable (see staircase in Harry Potter).

·         Let setting change over time so reader can’t expect it to be the same/stable place, like seasons/aging.

·         Give setting a heartbeat so it moves/changes/acts of its own accord.

·         Make setting a direct threat, an unknown hazard, a promise land that falls short or an elusive oasis.

·         Formatting and white space on the page can set a tone, allowing the reader to turn pages faster, which gives the reader the illusion of a quicker pace. Use of punctuation to slow or quicken the pace, use of shorter sentences and avoiding anything to slow the action.

·         The Loaded Title: Choosing a title is essential in your promise to a potential reader. Keywords create urgency, danger, panic. Use your title to ask a question, promise a crime, add mystery, hint at conflict, secrets, revenge, vengeance.

·         The Suspense Book Cover: Suspense genre has a certain look. Note similarities, Font, Spacing and set up. The look of your cover delivers a promise to the reader-- dark/light, photos, font and how and where to place the title and your name. 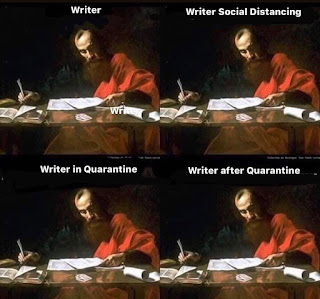