As the sky lightened, I greeted the day with a pot of hot Kona coffee and cream that I barely pass over the cup to achieve the perfect color of black on the side of brown. Meetings aside, I set to writing on the lanai as Lynn and JoJo headed out the door in the beat-up Maui Cruisermobile to exercise the little canine for the day, before it got hot.

Trying to make a routine of it, I forced myself to get on running clothes and head out through the neighborhood and down to the lower Honoapiilani Highway, past S Turn to Kahana where I remembered my days on Maui selling timeshare at the very corner where I stopped. Good times, good times.

Back at S Turn, I removed my shoes and walked into the cool ocean to get my body temperature back to normal and hopefully assist my purple face from over-exertion to returning to a normal color for human faces. The day was cloudy, slightly breezy and the temp was much nicer than the day before for running. 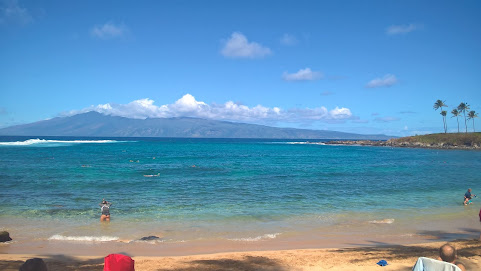 When I got back to Lynn's house, I was determined to get my friend in the ocean for the first time in over 18 months. Although she lives 2 blocks from the beach, she's been fearful of her fragility after chemo, surgeries, radiation, surgeries and then a year of not leaving the property. At the water's edge she saw a giant green sea turtle and I grabbed my mask, snorkel and fins to leave her fending for herself while I pursued the green sea turtle for a look-see. I ended up way out on the southern point, looking at a group of 5 sea turtles, some with large tumors on their necks and wondered what's happening in Hawaii to the turtles. When I got out, I asked my personal assistant (Siri) and found out that FP is common in green sea turtles. You don't want to know what FP stands for because the name uses every letter in the alphabet and you'll be no further ahead knowing. When I taught diving in Hawaii for 11 years, I saw plenty of turtles and never saw FP but it was concerning to see a turtle with tumors at S Turn.

Two swims and a lie on the hot beach in the sun (that decided to show itself) later, Lynn and I found ourselves back at home napping. Hey, I was up at 4:45.

I couldn't sleep maybe from all the Kona coffee and instead watched my saved/coveted 2nd episode of The Mosquito Coast with Justin Theroux. By the end of the episode I was wide awake (if  you've seen it, you'll know why) so I got up and started to make dinner. I'm trying to stay low carb because I recently lost 15 pounds of quaran weight and do not want that slab of fat back. I cheated with a little pineapple. 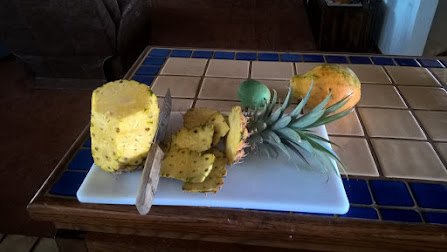 I made another salad and chicken accompanied by a baguette for Lynn. After Lynn and JoJo returned from their sunset walk, we ate on the lanai, watched the sun duck behind the horizon and went inside to watch a movie. Lynn's friend Bryant had suggested Gattica with Ethan Hawke and Uma Thurmin which was strange and wonderful to see them and Jude Law as young adults. I rolled into bed as soon as I saw THE END, passed out immediately and dreamed of rearranging furniture in a house to accommodate turning it into a preschool that included monkeys. 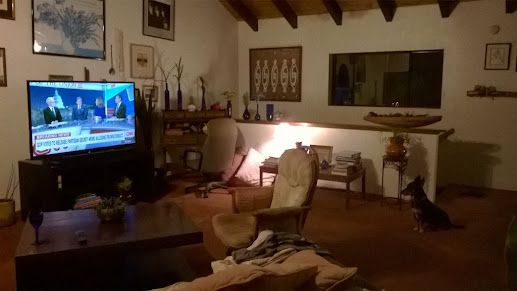 Such is my imagination. Three days until my birthday! Lynn and I plan to have some fun on Saturday!