MOODY & The GHOST is perfect Halloween Reading if you don't want Horror elements that will keep you awake at night worrying. 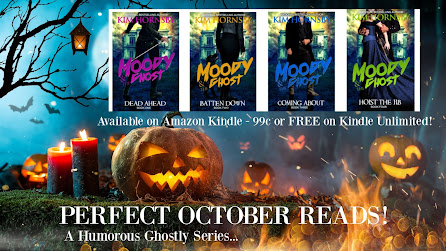 When I started writing Moody, I gave myself permission to write 1st person, my favorite, from the viewpoint of a slightly snarky person. How wonderful is that? I'd written this quirky character in a book called Dream Come True about a ghost interfering in the lives of a family who lived next door and I liked the ghost hunter, Mrs. Moody, so much, I gave her a series of her own.

As a reward for all my hard work that year, I allowed myself to write purely for fun, to inject my sense of humor into the paragraphs and characters and to be as strange as I wanted. But first, I wrote the TV pilot. Why, you ask? I'd met a producer I thought was looking for content that could be shot in Oregon so I hurried to write the pilot to pitch to him. Turned out he was not looking for material after all, instead changing careers to real estate BUT I had the beginnings of a pretty good TV show. Then, I wrote the novella with the intention of making this a long series. A serialized series that continues. I didn't realize that readers have mixed views on cliffhangers at the end of books. Actually, many readers don't appreciate being left hanging, the way a TV show does at the end of the week's episode. Oops. I continued on, knowing if I priced the books low, readers might forgive me for leaving them hanging and having to buy the next book to see what happens next.

The TV pilot has gone on to win several awards, the latest of which was at the Austin Film Festival as a 2nd Rounder, something I'm very proud of. The script has had coverage, consultations and editing up the yin yang to be the final version it is this month.

As for the books, they have a faithful following of readers who think Caspian Cortez is their book boyfriend and Bryndle Moody is their alter ego. I'm proud of the fact I introduced time travel and didn't end up going bats in the belfry nuts over the logistics. It wasn't easy keeping track of all the time travels and twists in the story arcs but according to my readers, I delivered and for that, I'm proud.

Moody & The Ghost books are written from the viewpoint of a 28-year-old woman who has gone blind in a car accident but finds she can see in the presence of a ghost. The spirit, Captain Caspian Cortez (named by one of my readers!) just happens to be a very handsome sea captain from the 1850's and as Bryndle Moody copes with his comings and goings and the life of a blind person, she gets in all kinds of sticky situations. 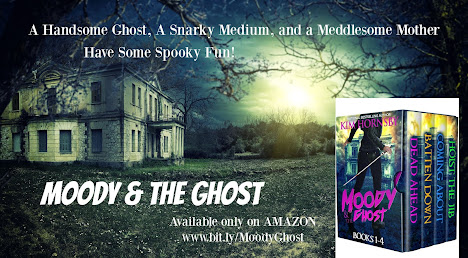 I like to say the tone of the story falls somewhere between The Haunting of Hills House and Scooby Doo, then add a romance like in the movie GHOST. There's a fun team of paranormal investigators led by Bryndle and they travel around in a van called the Marshmallow. But also, there's this amazing romance that comes to fruition in Book 3 that is doomed and conflicted and desperate.

It's Ghosts, Suspense, Time Travel, Humor, Romance and you even get a few Recipes with each book!

On KINDLE UNLIMITED for Free